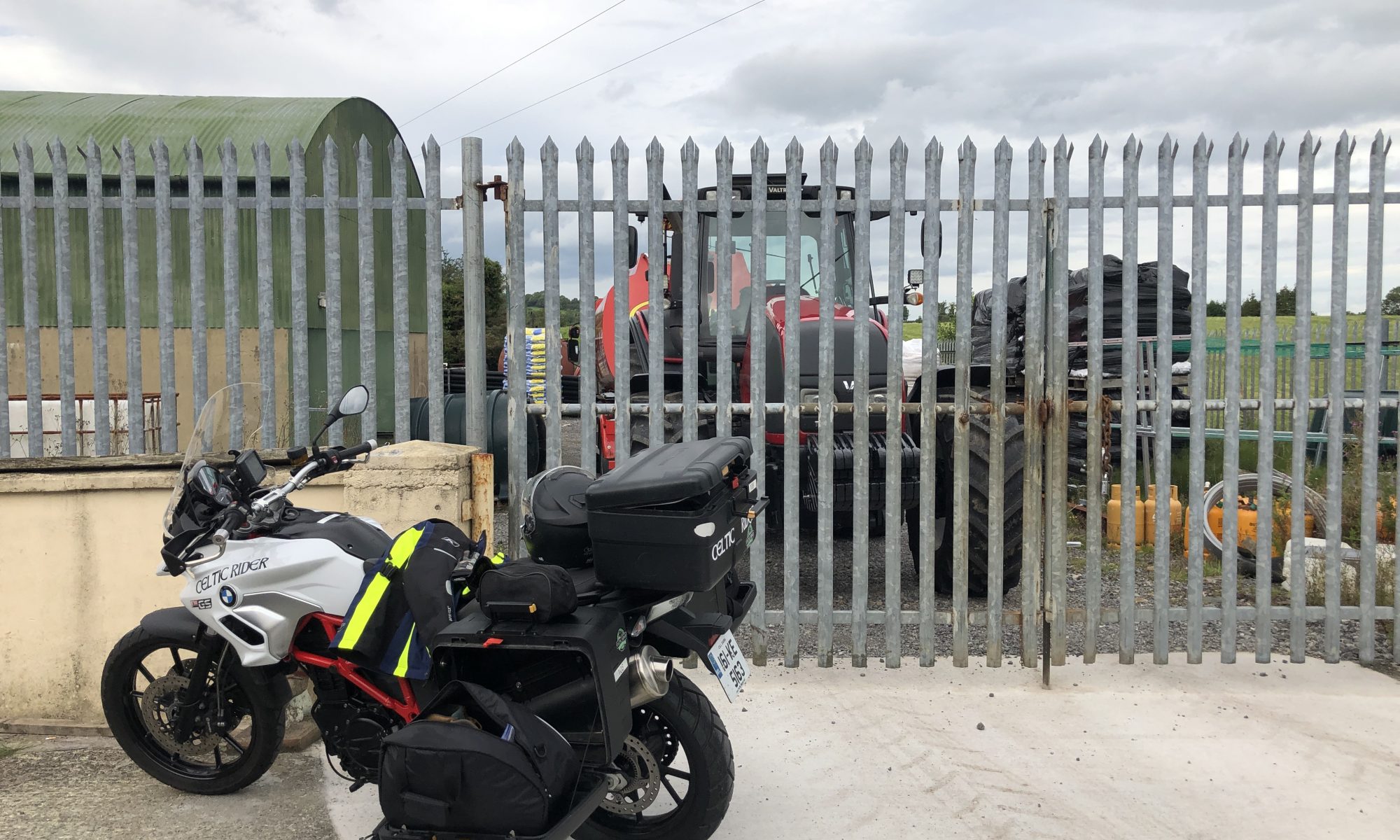 I’m breaking up my recent motorcycle trip through Ireland by day to post. Here’s how it all went down.

We took a red eye flight to Dublin, with plans to taxi immediately to Celtic Rider in Kildare and hop on our bikes. With a three hour delay and flight complications, we were pressed for time when we arrived at Celtic Rider at 10am. Paul from Celtic Rider had us set up efficiently and it didn’t take long for us to have our suitcases re-packed into the hard cases on the bikes.

This was the first time I’d be riding a bike with this much luggage on board and I was a little nervous about the weight and height. At 110 lbs wet, bikes don’t often even know I’m there. My dirt bike seat height sits at 36.5” and with a lowered BMWF700GS the 30” seat height proved to be no problem at all. I was amazed at how much we could actually pack into two side cases and one top case. Tyler and I were also dragging along camping gear even though the plan was to stay in hotels. We were hell-bent on finding spots to camp in Ireland en route. So we had tent, sleeping pads, sleeping bags, cook set and MRE’s to fit along with our clothes. With one extra bag strapped to the back of Tyler’s bike, we had it all on board.

Paul from Celtic Rider set out with us for an hour long introduction to riding in Ireland. He was incremental in helping get us used to riding on the opposite side of the road, understanding the road signs, which vary quite a bit from American signs, and then he sent us on our way.

Our 7 day trip was self guided, with Garmins set by Celtic Rider to take us from one destination to the next. We also had a printed guide, describing suggested stops and places to see along the way. I was really into this setup – I’ve taken guided trips before and while you do learn quite a bit more with an actual guide, the sense of freedom to be able to set your own schedule and veer off course is taken away. And that’s one of the things I love most about traveling. From Celtic Rider we set out to make the 223 km trip to Donegal. Because of our late arrival, we basically had to book it to the destination. But “booking it” in Ireland, especially when you’re staying off the freeways, takes a long time. A 200km ride on back roads can take you all day, and we learned this pretty quickly.

I led most of the first day, with Tyler next and my dad and mom in the back. Ireland uses roundabouts more than traffic lights, which keeps things flowing a lot better than having to stop all the time. But it took some getting used to to understand which lane to be in on the approach. I had to sneak in between cars a couple times on the first day after starting off in the wrong lane. I was super happy with the handling of the F700 already – for it’s weight it was still super nimble and responsive.

Not being able to make stops on the first ride day didn’t really matter much, I was too pre-occupied with the insanely beautiful scenery and the repeating thought of “holy shit I’m riding a fucking motorcycle through Ireland” A good start to the trip. We got to Donegal right before sundown, and our hotel, The Central Hotel, was right in the center of the town square. The Olde Castle Resturant, a short walk form our hotel, gave us our first taste of traditional Irish food; lots of seafood, locally raised meats and veg, and lots of Irish whiskey. I won’t talk about the food much, but know that it’s incredible.