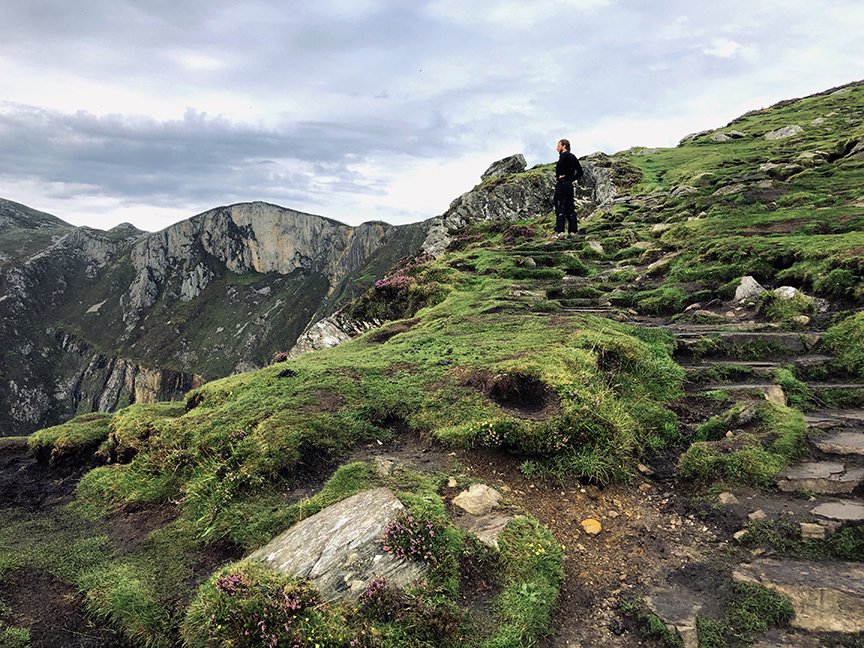 It rains a lot in Ireland. We knew this. But our first whole day of riding was absolutely perfect. It sprinkled for maybe 15 minutes or so the whole day, and the sun even came out a few times. The first few days of riding, it took a lot of concentration to just remember the differences in traffic. Look right, stay left. Sounds easy, but it really does take intense concentration to break years of habit. It wasn’t until day three or so that we were all comfortable with the change. And I was also getting used to what it felt like to ride a touring bike. I don’t have many four strokes, and definitely nothing that weighs as much as a fully packed BMWF700GS. Getting used to the engine brake, and riding a bike that was heavy enough that pulling the throttle in made me speed up was enough to completely occupy my mind during the 226 km of day 2. Tyler led for most of the day, and ended up leading for the majority of the trip. He’s such a good rider – his pace was always perfect for the road and level of traffic, so it made sense for him to take the lead.

The route was incredible. I’ve never seen country side so lush. You could feel the history everywhere, and our first stop at Glenveagh Castle solidified that. Set within the Derryveagh Mountains, we spent a good two hours walking around the castle grounds, which I found much more interesting than the castle itself.

We rode past Errigal mountain, and took a couple stops to get some photos on the way the Slieve League Cliffs, Ireland’s highest sea cliffs. This ended up being one of my favorite stops of the trip. The cliffs are a bit difficult to get to via a winding mountain road. There was a gate at the road, which in Ireland doesn’t necessarily mean you can’t enter – it’s just there to keep livestock in. It had already been opened by others on that day, so we rode straight in. We rode up to a small top parking area before getting off the bikes to climb the rest of the way.

The Slieve Cliffs are obviously a popular spot, but not commercialized. No gates or payment required. Just get there and explore. I loved it. We spent several hours wandering around. There were sheep everywhere, which started a trip-long obsession to try to pet one. Irish sheep aren’t very interested in humans. But they definitely know the best landscapes. We hiked out to a watchtower on one of the cliffs that was surrounded by more sheep shit than I’ve ever seen in my life. I can’t blame them. That’s where I’d hang out all the time, too. The views were insane.

On the way back to Donegal we stopped in Killybegs. a fishing port, to have dinner. It’s Ireland’s largest port, and still has more charm and character than even the smallest ports in the states. Returning to Donegal, Tyler and I parked in the town square, where several other bikes were parked after the day’s ride. The street parking gets really crowded – my dad had woken up that morning to a van parked a literal inch away from his bike. We didn’t even know how he could’ve fit in there without moving the bike. We spoke with a few local folks that said it shouldn’t be a problem to just park the bikes in the square all night. I wish the states would be more accommodating to bikes like that.

That evening, the bars were packed for Saturday night. Tyler and I found a spot off the square a little bit with a pool table and we shot a couple games. It’s a lot different there, and I remembered playing this way in France years ago. The balls are not numbered – they’re yellow or red, and smaller than typical pool balls (along with the pockets). A scratch gives your opponent two shots on their next play. I smoked Tyler that first night, but he would be the one carrying us a few nights later playing doubles with some rowdy locals.