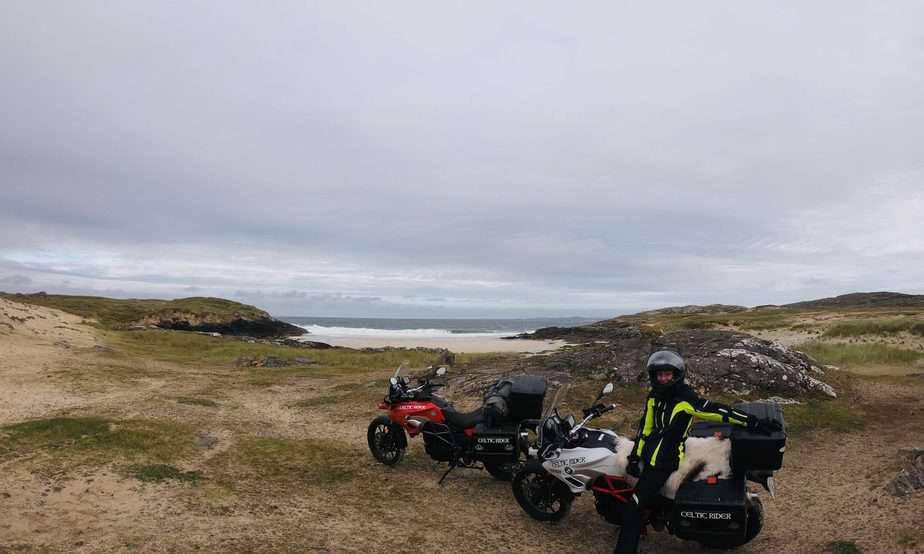 Our Celtic Rider description for Day 4 said it would “possibly rank as one of the most enjoyable rides of your life” so we were pretty stoked for the route that took us through Maam Cross and the Partry Mountains and onto the “Sky Road”. We stopped in Roundstone Coastal Village after I saw a shop with sheepskins hanging over the front railing and decided my bike seat needed an upgrade.

I’ve seen older riders with sheepskins on their seats before and always kind of laughed at the addition, but I’m telling you it was like sitting on a fluffy cloud. Until it rained, and then it was like sitting on a wet sheep. And it rained, and didn’t stop. We couldn’t see more than 15 feet in front of us for most of the ride into Kylemore Abbey, so who knows if it lives up to the Celtic Rider hype. But luckily everyone was laughing about it. While parked and drying off, an older guy came over to ask about the bikes and started reminiscing about his years competing in trails riding all over the world. He rode Bultacos and Montessas, and I was wishing my dad hadn’t walked ahead before we ran into this guy – they would have had a lot to talk about. Those moments are some of my favorites as a rider. Anyone that’s ridden has a story and a good memory; they always serve as ice breakers and a common language between strangers. We found out from several folks that dirt riding isn’t very popular in Ireland. No-one really had a proper explanation for it, just that it never really took off there. I wonder if it’s because so much of the land is privately owned farmland. It’s definitely not because of the lack of terrain.

My mom was adamant about wanting to stop at Kylemore Abbey, and it took us some work to actually find it, but it was so worth the stop.

The Abbey dates back to the 1860s when it was built by Mitchell Henry when his new bride fell in love with Ireland, and then she tragically died of dysentery after a trip to Africa. The Abbey went through several hands of ownership in its lifetime, and operated as a school and now a Benedictine nunnery. Henry built his empire there, keeping massive walled gardens and greenhouses running, and giving employment to Irish workers that had just suffered though famine and a cholera epidemic.

It’s pretty unbelievable to get a glimpse into how these people lived at the time. The walled gardens and greenhouses were only partly restored, but you could imagine just how immense the whole place was in its prime. The castle itself was set up similar to how it would have been in the 1800s, with extremely lavish furniture and dinnerware. Not really my thing – I just kept thinking about how much it would suck to have to clean that whole place. I’d take the gardener’s house with three rooms any day (add a giant garage, please)

The search for a camp spot continues

Tyler and I split off after Kylemore Abbey and put coordinates into the Garmin for what we thought might be a spot to camp. We had done a ton of searching online, and Tyler found a spot south of Westport on the coast, that was supposed to be one of the few “wild camping” spots in Ireland. The coordinates (which I won’t share unless you have a secret spot to trade) led us down another rural road, the kind that is paved but has a strip of grass running down the center. Pretty common in Ireland. It was still raining, enough so that I had to ride past a turn Tyler was making because I was sliding on the wet road when braking.

By the time we found the sand path out to the beach, the rain had slowed down and we could see a car coming out from one of the paths, so we decided to take that one. Slowly. It led us around a few bends and then straight onto a cove looking over the North Atlantic. There were a few vans parked out there but no-one else in site otherwise. It felt pretty good to pull out the camping gear and set up so we could see the ocean and the bikes from our tent. Definitely a dream of mine, and I was so happy we did it. We got to hike around the rocks by the cove a little before it started raining again. If anything had been dry enough to have a fire, we probably would have gotten in the water. But everything was completely soaked. One bottle of wine and a weed pen later, we both agreed one more bottle would have been perfection.